You Are Here: Multi-level Modeling for simulation based design

Multi-level Modeling for simulation based design 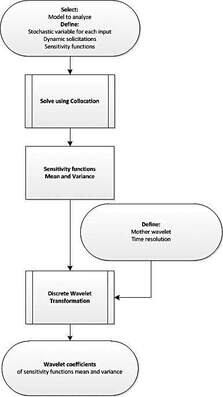 To implement a simulation platform with automatic model level selection features, we propose a process to synthesize the differences in accuracy between the levels of the model of each component. This process comprises a preliminary simulation phase, performed once for all, that yields the differences between levels in a stochastic sense by exploiting the Collocation method. The results of this preliminary analysis are then synthesized in a sensitivity function, which is the base for level selection. In this way we evaluate the uncertainty caused by a lower accuracy level on a specific variable as consequence of a specific dynamic event, and independently from the operating point. The process of synthesizing the differences between levels is then completed by transforming the sensitivity function via discrete wavelet transform. This new and final step in the description of the accuracy differences between levels was introduced to allow for the use of a rule-based approach to the automatic selection of the components levels for a specific design objective. The acceptable uncertainty introduced by a lower accuracy components level depends on the design objective expressed as a design function.

The rule-based approach emulates the common reasoning, and although it may not produce the absolute optimal combination of levels, nonetheless it provides a satisfactory tradeoff and can be automated. In fact, in principle the optimal level selection could be achieved based on the analytical or numerical calculation of the exact accuracy of the variables of interest for design, yielded by any given combination of levels. This option has been discard as poorly scalable and leading to excessive computational overhead that would nullify the advantage of the automatic model level set-up. Furthermore, one more reason behind the choice of a rule based approach for the level selection is that, in many cases, the selection is to be performed only on a subset of components. In fact some component levels may be fixed for particular reasons (e.g. negligible dependence of the design variable on the model of another subsystem due to distance or specific needs of the designer). With a rule-based approach many combinations of levels can be immediately discarded, just checking some properties of the components. All these information have to be embedded in a meta-model containing the different models of the components, together with all the information associated with that (e.g. range of validity and computational cost of each model).