You Are Here: Real-time Testing platform for distributed intelligence 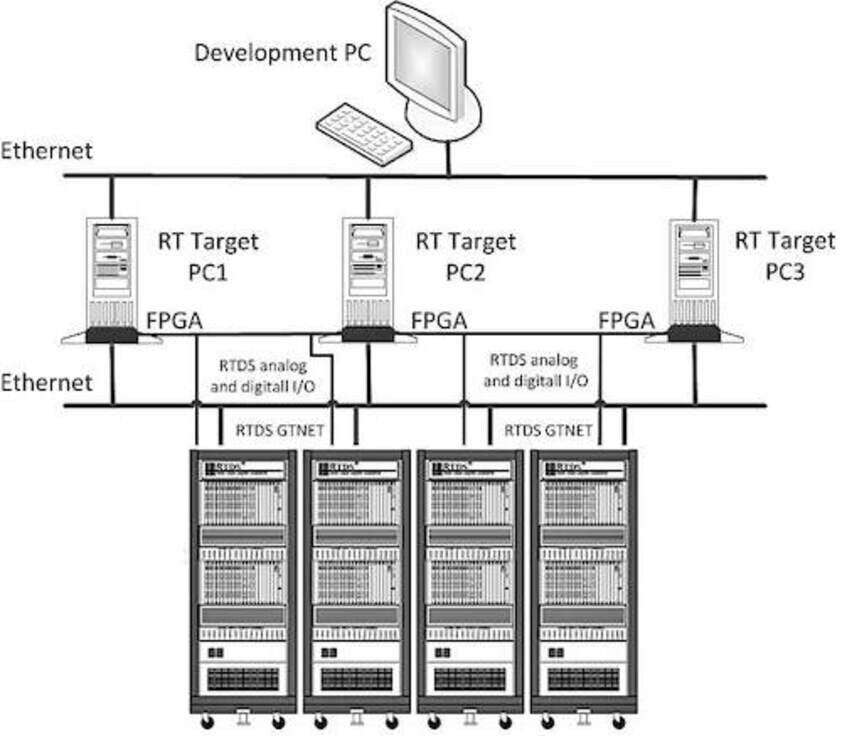 The real-time simulation environment of the intelligent devices is achieved with LabVIEW Real-Time Target. Data acquisition and synchronization is realized with the FPGA card connects to Real-Time Target via PCIe port.

The communication between RTDS and testing platform can be realized by two ways: 1. GTIO: traditional communication method, using analog and digital I/O port. 2. GTNET: it provides real time communication to and from the simulator via Ethernet. It allows for the transmission of the data directly in the digital form in which they were calculated. There are four different communication protocols available for the GTNET, IEC 61850 GSSE and GOOSE, IEC 61850-9-2 Sampled Values, Distributed Network Protocol (DNP) and GTNET-Playback.

Furthermore, due to the interdependence between the power network with the communication infrastructure, more and more distributed intelligent devices, such as distributed measurement and control for fast reconfiguration of power system, need an WANem (Wide Area Network Emulator), which can be used to emulate WAN characteristics like time delay, Packet loss, Disconnections, etc. It was developed at ACS and be explained in another annual report.

Because of the implementation of the various and complicated communication methods, the flexibility of the testing platform has been increased. It can individually implement the control center, which needs to exchange a large number of different kinds of data with the subsystems via DNP protocol; it can also individually realize multi-distributed PMU emulators or protection equipments, which need limited number of sampled values via SV protocol or GTIO port; particularly it can implement the integrated simulation of distributed measurement devices and control for fast reconfiguration via the collaboration of the different communication methods.

Case study: We have already tested a simple distributed state estimator in our testing platform. A simple DC power system was implemented in RTDS; the decentralized Kalman Filter was implemented in three real-time distributed state estimators to observe the current and voltage in different location; GTIO was used to provide the communication between the RTDS with FPGA of each estimator, and each estimator could also exchange information via TCP/IP protocol; signal generator was used to synchronize each estimator via FPGA.