You Are Here: A Multi-Level Modeling Concept for Electrical Systems 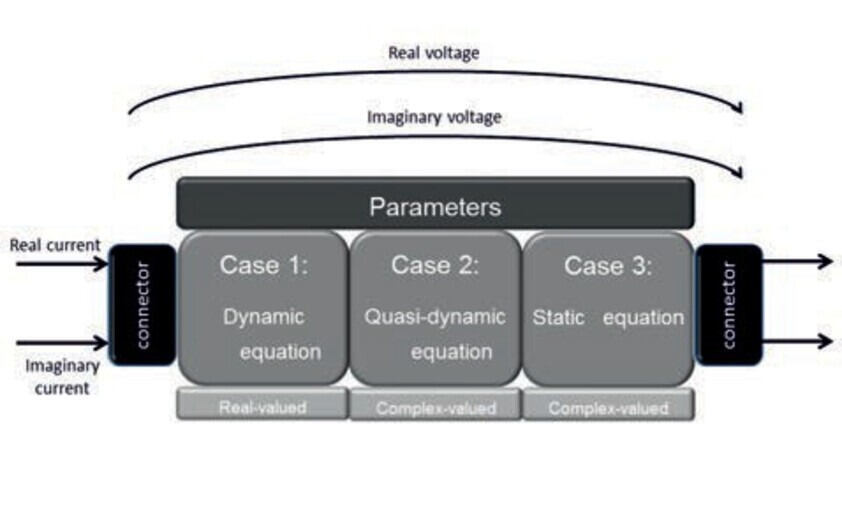 In order to facilitate the analysis of electrical systems from several perspectives, as may be necessary when studying multi-disciplinary systems, we propose a multi-level modeling approach for electrical components comprising steady- state, quasi-dynamic and dynamic time scales.

Simulation of electric power systems is one of the most important tools in power system planning and analysis, both for the electrical system as a standalone subject and as a part of an interdependent, multi-physics system. Electro- magnetic effects such as switching phenomena and large disturbances can only be captured with dynamic equations and simulation time steps in the range of 10-7 to 10-5 seconds; whereas a slow load or generation variation can be appropriately investigated with steady state models such as the commonly used phasor representation. Thus, a general approach to power system analysis needs to deal with the fact that the dynamic phenomena are classified in seve- ral different time scales.

Especially in multi-disciplinary systems, the electrical sub- system can interact with several different physical phenomena with different time constants. For example, in a multi- physics system comprising a thermal, a communication and an electrical subsystem, there can be interest in executing a joint thermal and electrical energy management in contrast to a control design for interdependent communication and power systems. In such cases, it becomes necessary to mo- del the same electrical system with different approaches, in order to include more or less dynamics or to avoid computa- tional burden when fast dynamics are not the focus. However in a component based modeling environment, changing the representation typically involves a remodeling of the complete system with different component models and solving tools, therefore doubling the modeling effort and creating an additional source of errors.

In order to tackle this problem, we have developed a gene- ralized multi-level modeling framework, which accommo- dates dynamic, quasi-dynamic and static representations of an electrical system as different modes of each single component model. The dynamic level is modeled with clas- sical differential equations, whereas the quasi-dynamic and static levels are based on complex representations: the quasi-dynamic representation is achieved with dynamic phasors and the steady-state behavior with static phasors. Thus, the component structure needs to be general enough to incorporate all properties of each representation. First experiments with a test library in Modelica have produced results comparable to analytical solutions or commercially available modeling and simulation platforms in all levels of dynamics.

Using this modeling approach, an electrical system can be modeled once and then simulated in different levels for different purposes without re-modeling, e.g. dynamic simula- tion for protection analysis and steady-state simulation for load flow calculations. The choice of Modelica leads to the additional benefit that systems of other physical domains can easily be modeled and then simulated together with the electrical system.