You Are Here: Hybrid AC/DC Microgrids: A Bridge to Future Energy Distribution Systems

About one century after its surrender to the AC technology in electric power systems, the DC power has come back as an increasingly strong rival, thanks to the technology advancements in power conversion, generation, transmission, and consumption. However, in spite of significant advantages in many applications, there are still several challengesto overcome and the DC technology should be integrated into the system through a smooth and step-by-step process. Microgrids, as a promising building block of future smart distribution systems, are one of the main areas where the DC technologies are expected to prevail. In particular, hybrid AC/ DC Microgrids may facilitate the integration process of DC power technologies into the existing AC systems. 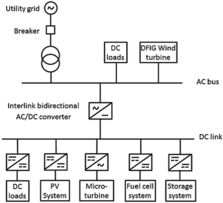 Many of the historical reasons that led AC to dominate over DC power systems are not valid any longer. In the generation sector, many distributed energy resources, such as photovoltaic systems, have emerged that generate power in DC form. Many of the modern electrical loads, as well as energy storage systems, are either internally DC or work equally well with DC power and connect to the AC systems through converters. Thus, application of DC power would allow the elimination of many AC-DC and DC-AC conversion stages, which would in turn result in considerable decrease in component costs and power losses, and increase in reliability. Also, many power quality issues, such as harmonics and unbalances, are not present in these systems.

In spite of all these advantages, however, there are a number of factors besides the entity of legacy systems, which hinder the adoption of DC systems. One of the main reasons is that until very recently, there has been almost no standardization for DC systems, particularly at low voltage level. Relatively little industrial experience, safety and protection concerns, and the mental barrier against a paradigm shift are some other factors slowing down the wide-spread use of DC systems. However, the DC technology has already started to be integrated into the existing AC system step by step. This is leading to the emergence of hybrid AC/DC systems in which AC and DC buses are connected through interlinking, bidirectional converters. Control of the interlinking converter, as the energy bridge between the AC and DC sides, is a critical issue for ensuring stability and utilizing the system potential to improve the quality of service. Microgrids, which are characterized by a combination of dispersed generation units, storage systems and loads, are one key application where hybrid AC/DC systems may offer significant benefits.

In our research at the ACS institute, we focus on the quantification of energy efficiencyimprovement that hybrid AC/DC systems may introduce in buildings, as well as on the control of the interlinking converter, with the aim of improving the stability and power quality of Microgrids. In particular, we are working on the improvement of the techniques for load sharing among the resources connected to AC and DC buses of the system. In addition, we aim to control the interlinking converter in a way that the voltage harmonic distortion at the AC bus, resulting from the non-linear load and the voltage unbalances, are mitigated. This research is supported by funding by United Technologies Research Center (UTRC).