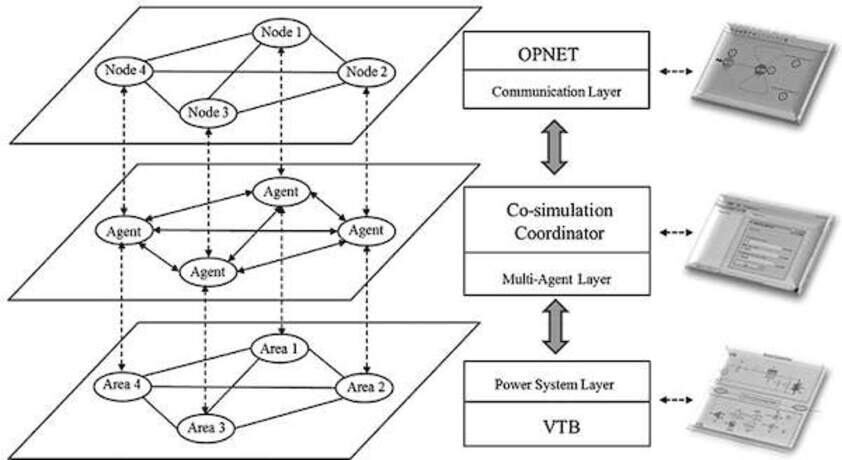 In modern power electronic systems, traditional protection devices that act on local information to respond to faults become more and more inefficient as the complexity of power system grows. In order to implement accurate and reliable protection schemes, the concept of multi-agent system (MAS) is introduced and it draws more and more attention in recent years because of its autonomous nature, ability to share information and coordinate actions, and the potential to be easily replaced from remote facilities.

The MAS based protection in this work operates based on the local measurements available to each agent and on the information exchanged between the adjacent agents, for the later aspect, communication network conveys information to be exchanged therefore should be considered as a vital determinant of system performance. So in this way, the process of designing the MAS based protection for power system warrants consideration of not only the dynamic occurs in the power system itself during fault situation, that is how each agent should act, but also the phenomena that brought by the communication network, such as communication delays and disruptions. Co-simulation method gives a proper solution for concurrently analysis of power and communication for its multi-physics capability.

ACS had previously developed a co-simulation environment named VPNET, which consists of three main components that realize the concurrent simulation, in dedicated environments, of the power and communication parts of a system. VPNET has then been recently extended to investigate MAS based protection schemes. The environments involved in the co-simulation are VTB, which simulates the power system, and OPNET, which simulates the communication network. Each agent of the MAS is represented as a communication node in OPNET communication model. The intelligence of each agent can be defined in Co-simulation Coordinator through a “S-function” based module, Each agent is associated with an electrical component in the power system layer (like PEBB in MVDC power system), which is restricted to communicate only with its neighboring agents. The main contributions of this research can be summarized as follows:

• Extending the previously developed co-simulation tool VPNT to enable it with the capability of simulation of MAS schemes.

• Works as the first stage toward real time co-simulation with VTB-RT and OPNET.