You Are Here: A Test Bench for Low Voltage Microgrids

Today, transmission and distribution of electrical energy is mainly operated by means of three phase alternate current technology. At the same time, more and more loads used in residential and commercial buildings are based on power electronics converters and many domestic renewable sour- ces are directly connected at low voltage level. Hence LVDC distribution is becoming an attractive solution.

An overall DC solution will significantly increase the effici- ency of the power transmission and distribution. Moreover, it will allow an active routing of power, an increased level of reliability, and versatility of the power grid. At the same time such a scenario creates new challenges that need to be addressed. To this aim, a test bench for microgrids has been set up in the ACS lab. 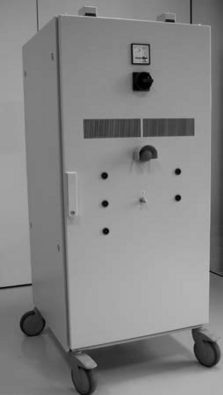 The test bench is intended for scenarios in which both AC and DC systems operate in conjunction. With such a setup, we may be able, for example, to test different control stra- tegies for concepts like demand side management, active energy routing among neighbors, or seamless transition between grid-connected and islanded operating modes.

The converters will receive references (e.g. grid voltage, power required by the loads, power generated by the re- sources) from one of our real time simulators while the lo- cal controller are implemented on an embedded DSP-FPGA control platform. Even if not considered in the first scenario, the local controls may be interfaced to the multi-agent sys- tem (MAS) locally installed on our PC cluster or embedded on single-board PCs.

Opal-RT has been selected as platform for real-time simula- tion for this application, due to its eHS solver, which allows for a very accurate representation of power electronics sys- tems. The WANem network emulator is used for the emu- lation of a realistic behavior of the communication links among the microgrid converters, the MAS, and Opal-RT.