You Are Here: FINESCE: Future Internet Technology for Smart Energy 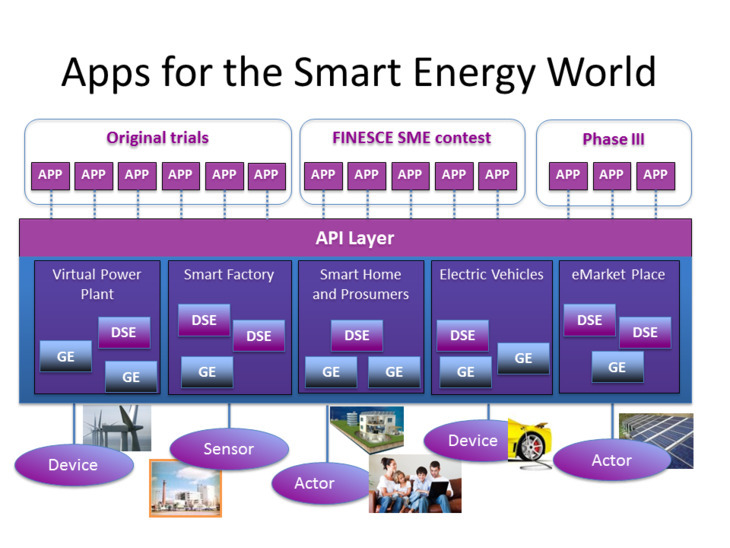 The Internet will continue to grow, develop and become more pervasive. Devices will become Internet-aware, allowing them to be monitored and controlled over the Internet. The vast amounts of data thereby generated will be processed using cloud computing. The EU is advancing Europe's competitiveness in Future Internet technologies and systems through the Future Internet Public-Private Partnership (FI-PPP), which was launched in May 2011. FI-PPP projects address different areas such as energy, health and media content, building on common FI technological components (called Generic Enablers) that are re-usable, open and interoperable with evolving infrastructure and technologies. The first phase of FI-PPP developed a set of FI use cases. The second phase, which is currently ongoing, is implementing a series of field trials of FI applications.

FINESCE has held dissemination events resulting in eleven SMEs (Small and Medium Sized Enterprises) joining the project as partners in summer 2014.. FINESCE has produced an Application Programming Interface (API) which allows these new partners to develop applications which interact with the field trials, supporting the creation of a network of smart energy application developers. For example, the API publishes data on the status of equipment such as boilers or coolers in the houses in the trials and SMEs can develop applications based on this data. This leads then to the FI-PPP Phase 3, in which competitions are being held for SMEs to participate in business acceleration programmes based on using FIWARE and the results of Phase 2 projects like FINESCE.

ACS is leading the technical direction of the project as technical manager. Also, ACS and EBC are involved in performing simulation activities in most of the field trial work packages. In FINESCE, simulation is used in order to

More information on FINESCE can be found on the www.finesce.eu website. In particular:

The General Meeting of the EU FP7 project FINESCE was held in Aachen.

The general meeting of EU FP7 project FINESCE was held in Madrid with participation from ACS as Technical Management of the project and research representatives.

Prof. Monti in Brussels for the first review of the EU Project FINESCE.

Prof. Monti in Malmö to join the FINESCE Innovation Day.

Prof. Monti and Padraic McKeever in Terni for the General Meeting of FINESCE.

ACS hosts a Workshop as part of Workpackage 5 in the EU-Project FINESCE.

Prof. Monti presents the EU-Project FINESCE at Utilinet and is voted as best presentation of the Conference.

Prof. Monti and Bettina Schaefer participate to the kick-off of the EU Project FINESCE. FINESCE is a large project with 20 participants sponsored as part of the Public Private Partnership Future Internet. Prof. Monti serves as Technical Manager

This project is funded by the European Union’s Seventh Framework Programme for research, technological development and demonstration under grant agreement no 604677.