You Are Here: Certification Investigation of Wind Energy Converters (WEC) 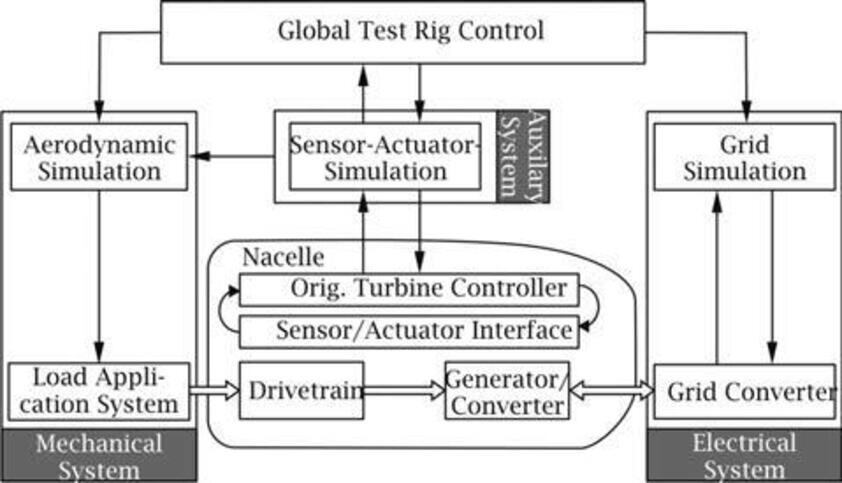 The experience from decades of WEC in operation shows that there are still unsolved reliability issues regarding electrical and mechanical components. Moreover, as the share of wind energy increases constantly, it is critical that the certification to be fulfilled before connection to the grid is clear and feasible. Designing the hardware in the loop test benches of the Center for Wind Power Drives (CWD) at RWTH Aachen (see Center for Wind Power Drives in the ERC section of this report) so that they realize repeatable conditions and are fit for certification is one of the main foci of ACS.

The certification procedures include mechanical, structural and electrical requirements to the behavior of the WEC in case of normal and faulty operation. ACS focuses on the electrical certification procedures, which state that WEC operation conforms to the grid codes of network operators. Special attention is drawn by Fault Ride Trough (FRT) tests, which constitute the main electrical challenge for WEC. FRT test consists in checking if the WEC fulfills specified behavior requirements in presence of off nominal conditions or faults at the point of coupling with the power system.

FRT tests are usually performed in the field, at the fully erected WEC. This approach is time consuming and costly, due to dependence on natural factors (occurrence of prescribed wind and resulting load conditions) and location (top of the tower, limited accessibility and sensorization). Ground level test benches for FRT testing promise to address all these limitations. As ground level testing of FRT is not clearly in- corporated in the relevant standards IEC 61400-21 and FGW TR3, the mapping of electrical certification for test benches onto existing requirements has been performed.

ACS participated in the set up the trial of a full exemplarily FRT certification process with the 1 MW nacelle test bench. Due to the limitations of this first test bench in terms of power and measurement accuracy, the testing condition was not fully conform to the certification requirement of the standards. Nonetheless, it constitutes a proof of concept for certification based on ground level testing of WEC. The experience gained in this process is the basis to design the follow up 4 MW test bench, which fully meets the power requirements for certification. ACS is involved in the design of the electrical as well as the mechanical interface for the nacelle under test based on a power electronic converter system and operated in a Power Hardware in the Loop set up.

The nacelle under test is an unmodified WEC, without tower and rotor blades, but with the unmodified original turbine controller, which runs the WEC on the test bench. An additional signal level Hardware in the Loop interface emulates the sensors that cannot be installed in case of ground testing e.g. the wind anemometer and the yaw sensors.