You Are Here: eHome 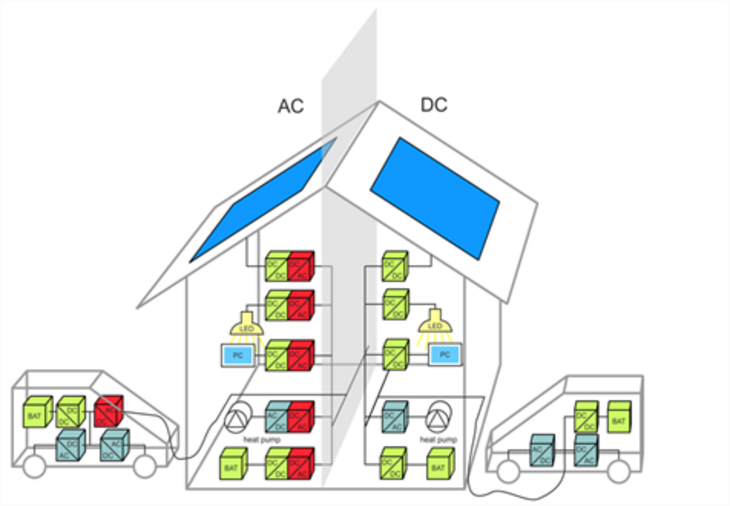 eHome focuses on the development of an energy management system for a self-sustainable fully electrical home, which includes new concepts such as electric heat supply systems and a local low voltage DC power distribution. 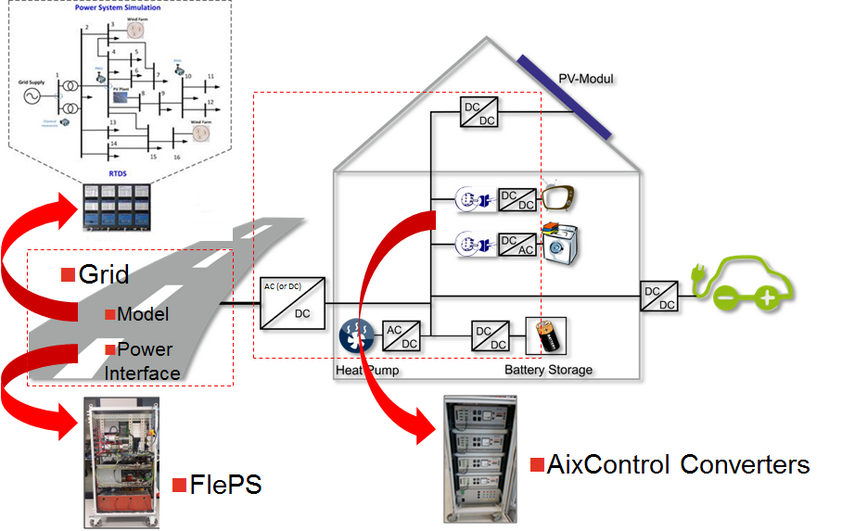 Due to the fact that the heating demand of buildings decreases with the increasing effectiveness of their insulation, energy efficient buildings have large fluctuations of heating power demand. In this situation, the heat generators operate often in partial loading conditions, thus with distinctly lower efficiency. Therefore, fast electrical heating systems could be beneficial.

Furthermore, considering the decreasing prices of photovoltaic (PV) systems and batteries, the fully electrical home may even become economically convenient, especially considering the self-consumption of local PV generation. The locally-produced electrical energy can be used for the new heating solution or it can be stored in batteries.

Also considering the fact that most of the electrical appliances as LED light, computers and variable-speed electrical drives, need direct current (DC), the design of a fully electrical home based on a low voltage DC system and power electronic converters is a quite attractive solution.

A power-electronic-converter- based DC distribution system yields efficient power transfer to almost all devices of a smart home. DC systems in general offer a higher efficiency, higher flexibility and lower component cost compared to the conventional AC systems. The structure of the electricity supply of a house with AC and with DC is shown in Figure 1. It is evident that in a DC supply system the rectifier stage (marked in red in Figure 1) is not required, leading to advantages in terms of a cheaper installation and increased efficiency.

For heating purposes, only direct electrical heating will be used which has the advantage of lower heating system losses and faster control of all appliances.

The home energy system is directly linked to PV power generation and an in-house battery. Smart power electronic converters can connect and control all remaining AC appliances. In this way, the fully electrical home offers a new quality of energy monitoring and control. 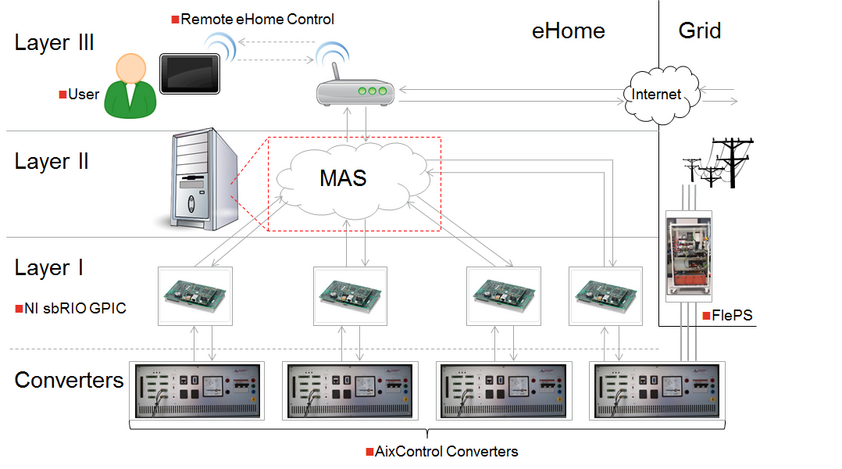 ACS’ main task is the development of a distributed intelligence solution for the optimal use of energy within the eHome. For this purpose, a DC nanogrid setup using DC power distribution comprising power electronic converters, shown in Figure 2, has been conceived and will be interfaced to the thermal domain within the house. The figure also shows the chosen hardware components that will be used for the final Power Harware in the Loop demonstration.

The control architecture for this DC nanogrid is currently under discussion and will be based on the following conceptual layered structure shown in Figure 3:

Layer I à the converter’s level control, and

Layer II à a cloud-based Multi-Agent System (MAS) which performs the optimization of the usage of the energy and sends set-points to Layer I.

The complete setup of power converters will be integrated in the computational facility of ACS to perform Power Hardware in the Loop simulation. This solution will allow emulating other components of the home systems not physically present in the lab as well as the interaction of the eHome with the local distribution grid.

In the year 2014, the project eHome started as a cooperation between the institutes ACS, EBC and PGS. We gratefully acknowledge the support of E.ON ERC gGmbH in this project.